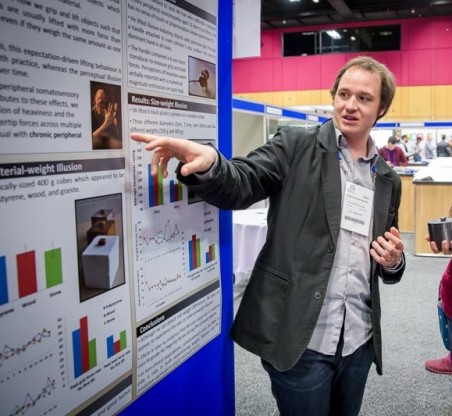 Dr Gavin Buckingham was awarded his Ph.D. in Psychology from the University of Aberdeen (UK) in 2008, before moving to Canada to take up a position as a postdoctoral fellow in the Brain and Mind Institute at Western University in Canada. His work there mostly focused on how we perceive weight of, and interact with, objects in the world around us. Around this time, he developed a particular interest in illusions, which have fascinated him ever since. He is currently a senior lecturer in the Department Sport and Health Sciences at the University of Exeter, where he leads the Object Interaction Lab

Perhaps I’m jaded, or simply myopic, but the thing that amazes me the most is watching my children learn about the world – I vicariously experience their amazement at animals in nature documentaries or the colours of the sky at sunrise.

Can you tell me more about the field you research and the applications?

My ‘core’ research is pretty closely linked to my public engagement activities – examining how cognitive factors such as prior expectations or the context of the situation affect how you act on things, and how you experience them. In the size-weight illusion, for example, small objects feel substantially heavier than equally-weighted large objects. The mechanism behind these illusions is far from clear. We are working toward understanding the psychological and physiological factors which drive our experience of how heavy things feel. [More info on this illusion]

Recently I’ve been branching out into a range of applied contexts, such as upper-limb prosthetic use and robot-assisted surgery, where the normal links between sensation and action are broken in interesting ways.

Could you tell me a little more about the challenges and opportunities that arise when researching prosthetic use?

I was recently involved in organizing a workshop focussed around the Psychology of Upper-limb prosthetic use to gain some insight into exactly this question. It’s reasonably clear that, at the moment, prosthetic hands don’t quite live up to the promise of our imaginations – they are simply not dextrous enough nor are they easy enough to operate to be a hand ‘replacement’. This is fine though if we step away from the limb replacement narrative and start to view these devices as assistive tools. The main challenges in this field seem to be focussed around recruitment of participants in order to conduct experiments to test hypotheses – there are far fewer users of a prosthetic hand or arm out there than you might imagine. Most upper-limb amputees, or individuals born with a limb difference, just make do with their remaining body parts in a variety of creative ways. This problem of having small samples to work with is compounded by the lack of a good model of prosthetic learning – the prevailing view seems to be that the prosthesis simulators available at the moment for research use are not adequate to really help us understand the fundamental nature of prosthetic use nor help those who use prostheses achieve better functional outcomes. The broader challenge is one that faces all inherently multidisciplinary fields of research – communication! Psychologists, neuroscientists, mechanical engineers, biomedical scientists, and prosthetists all tend to work in their own fields and have thus converged on distinct terminologies and ways to articulate their problems – hopefully more interdisciplinary workshops will help bridge this gap!

What’s your particular interest with robot assisted surgery? Tools like the da Vinci Surgical System are widely used in hospitals, what will be the obstacles the next generations need to overcome?

I’m interested in robot-assisted surgery (RAS) for exactly the same reason I’m interested in upper-limb prosthetic use – fundamentally they are both examples of dextrous (hand-like) actions without any input from the sense of touch. This should pose a massive problem for sensorimotor control (at least, so us touch researchers would argue!), but surgeons clearly manage to undertake hugely challenging operations. It’s worth clarifying that RAS isn’t quite as skilful as the hand itself, but of course surgery is never done by the hands alone. Instead, it’s undertaken with a range of tools or, more commonly these days, with laparoscopic tools to minimise the size of the entry incision and speed recovery time. RAS seems to represent a good ‘middle-ground’ between using the hands, and using unwieldy, stiff, tools. This seems to work well on the whole – not all procedures are well-suited for RAS, but it has made a huge impact on the world of urological surgery, and it has been shown to improve patient outcomes and less-considered outcomes such as surgeons’ stress levels. The companies who develop these technologies do an astonishing job of making full use of the resources of the surgeon ‘driving’ the robot have at their disposal (finger dexterity, stereo vision etc). It’s no exaggeration to say that they have almost no learning curve for simple tasks, and are incredibly fun to use (it’s no coincidence that the vast majority of RAS devices are developed and built by a company called Intuitive). Interestingly, the decision to leave touch (more formally described in this context as ‘force feedback’) is an engineering one – motors easily overheat with setups which have to ‘push back’ on the user. Indeed, it’s hotly debated whether putting touch back into the loop would improve performance, or whether it would simply get in the way of the surgeon – a question I’d love to contribute to answering!

One of the freakiest illusions I use is one based on the perception of weight (3 boxes, top one heavy, bottom two light). It produces befuddlement in spectators. Why are these class of illusions so compelling/disturbing?

I think there are three fundamental reasons – two simple, and one slightly more complicated. First, this phenomenon, which is basically a version of the size-weight illusion, is a hugely powerful and ubiquitous effect. It’s one of the largest illusions (and indeed, effects in psychological science), and almost everyone will experience it. Second, this is not an effect that anyone in a room is likely to have come across before – the wide reach of the internet doesn’t lend itself to illusions of touch. Finally, I think that we fundamentally trust our sense of touch more than the other senses, so violations of this sense are quite compelling. To expand on this, I think that it’s easy for us to imagine how our senses for experiencing stuff outside our reach (sight, sound, smell) can be easily distorted – we all intuitively imagine ourselves as passively perceiving signals from afar which can be changed by the time they get to us (such as seeing our hand bend in a funny way when we put it in water). By contrast, I think that the sense of touch is one which we feel pretty closely connected to, and thus place a whole different level of trust in that sense – there’s no where for the signals to be distorted in this fashion, which shakes many people to their core.

As a magician I find that visual illusions create an immediate reaction but mindreading (mentalism) and playing with memories is much more disturbing and longer lasting. Do you have any thoughts on how this? How would you advise magicians to create strong magic? Or possible phenomena you investigate in the lab that could be turned into magic illusions?

I think that science has more to learn from the tricks employed by magicians (and artists) than magicians have to learn from science! I suppose that any sense which can be explained away with a common media trope (visual hallucinations, mishearing things) might have less impact to a member of the audience. Because touch is a one-on-one thing which doesn’t really work over typical media, there’s a lot more scope for wow factor (obviously to smaller audiences at a time!). This is perhaps why street magic and close-up sleight of hand with cards is still, to this day, incredibly compelling to watch.

Where do you see the future of VR/AR going with the incorporation of haptic technology? There must be so much scope for investigating sensory conflicts.

I think that technologies to really add haptic feedback to VR are too bulky and expensive – they are all based on exoskeletons. Clever systems using hydraulics or pressure to expand parts of gloves to create the sensation of pressure might be a plausible next step, but I think it’ll be a long time before we see anything for the consumer market. But I actually think that science will play a big role in identifying how much haptic information we can replace (or substitute) with the senses that VR is very good at delivering – vision, sound, and vibration. This so-called ‘pseudo haptics’ might really be all that most people need to be fully immersed in the situation, which is really the goal in most cases. How this will translate for more serious VR application, like training of new skills, is another matter entirely…

Can you envision a time when people might fully inhabit virtual environments? (I’m thinking along the lines of sci fi films like The Matrix, Source Code, Avatar).

I think we’ve been approaching that for a long time actually. The virtual worlds in science fiction are obviously more immersive, but when I was at school I knew individuals who spent all their social time on internet chatrooms, and then later moved on to MMORPGs such as World of Warcraft. These virtual worlds are far more appealing to many individuals than the world they bodily inhabit. Obviously though this isn’t quite what you meant – you are asking about fully immersive virtual environments, indistinguishable from the ‘real’ world. There is a series of deep philosophical questions which would need to be addressed before going down this road. Pragmatically though, current immersive virtual reality systems rely on the user ‘doing stuff’ with their physical body, which is obviously an acquired taste which would limit uptake. Things like the Matrix and Avatar go completely the opposite way, taking the body out of the equation altogether. Due to issues around muscle atrophy and bedsores this also seems unlikely, even floating in dystopian pods of goo under the control of our robot overlords. What I can envisage is the world of simulation and training moving more and more into VR contexts – there are many situations which can’t be adequately simulated with physical tools (spaceflight, nuclear meltdowns, psychosis).

You write a lot about balancing the pressures of working as an academic. What are the key things that an academic do not just survive but to thrive and what should institutions be doing to support their staff (and their families)?

This is a difficult one to answer, as I don’t feel this is a balance I’ve yet fully achieved. I enjoy my work and am often able to see the busy periods as challenges to be overcome, rather than overwhelming mountains to climb. But I suspect that’s simply a product of the relatively smooth and privileged path I’ve had in my career to date. Academia is a unique rollercoaster of ups and downs, euphoric rewards and crushing lows. Staying happy requires the rewards to outweigh the lows, so I make an effort to celebrate the success of my trainees and colleagues (as well as my own successes) to try to balance things out.