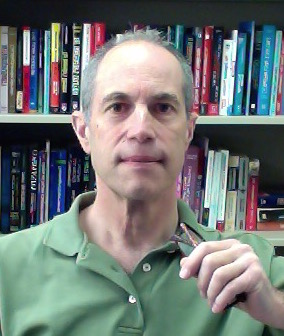 David Novick earned his JD from Harvard Law School and his Ph.D. in computer science from the University of Oregon. He joined the University of Texas at El Paso in 1999. His research interests center on human-computer interaction, with current emphasis on embodied conversational agents in virtual reality, color illusions, and engineering education. Along the way, David performed as a nightclub magician and mentalist, and taught skiing as a member of the PSIA. His current outside interest is coaching and performing improv comedy.

Can you describe something that has recently amazed you? How did it make you feel?

The book “All our wrong todays,” by Elan Mastai amazed me in its refreshing and deep take on the ironies of time travel and possible worlds. I was able to guess at some of what would happen—much is telegraphed on purpose, anyway—but came away surprised at several points. The most interesting part for me is how the protagonist is torn between restoring what’s been lost and losing what’s been gained.

In the space of 24hrs, four of my friends sent me a link to your Confetti illusion that went viral. Can you tell me about that experience from your perspective, of seeing your work spread across the internet? Both the good and the bad.

I’ve actually had two illusions go viral—the original four-color confetti illusion, in the summer of 2018, and a three-color confetti spheres illusion in the summer of 2019. The original confetti illusion really was the first illusion of its kind, extending the Munker-White illusion to achieve a surprising new effect. A couple of days after I’d tweeted the illusion, it somehow got picked up by various people and was bouncing around the net, sometimes with attribution and sometimes not. I first learned of this is when my wife, who had been looking at the website of a British tabloid, came running in to say that my illusion was on their website. In short order, the illusion was republished (not necessarily always with permission) by a second British tabloid, the Today Show website, local newscasts, and many more places. Eventually, the confetti illusion tweet had 17,200 likes, 6,600 retweets, and 3.6 million impressions. I was very briefly the most famous faculty member at UTEP. This illusion, now over a year later, is still getting likes and retweets. The extent of this virality is actually understated here, because the illusion was disseminated without credit on places like Reddit, eventually making its way back to Twitter again without credit.

The extension from dots to spheres happened because one of the people following me on Twitter suggested using target shapes that looked 3D. The second illusion, pursuing this idea, actually got far more likes and retweets than the original confetti illusion—just not from one of my own tweets. Someone else tweeted my image, and that tweet received 82,400 retweets and 193,800 likes! I estimate that this illusion probably had something like 40 million impressions. Several people followed up with things like animations showing that the target spheres really are the same color.

Some of the impact of the viral tweets has been wonderful. An American graduate student in Paris who is studying fashion asked to use my illusions to create new fabrics, and I immediately agreed. She’s now creating clothing with my images. And a scientist contacted me about using the principles behind these illusions to protect citrus crops.

What’s your interest with these colour contrast illusions? How do you go about developing them?

I was inspired to do this work by the illusions of Akiyoshi Kitaoka, who was profile 2 on Words on Wonder! Just as my research on virtual agents combines both fundamental research in human-computer interaction with the creation of VR applications such as adventure games, so too does my work on color illusions combine fundamental research into to perceptual stimuli with the creation of fun illusions that, I hope, amaze, confound, and contribute beauty.

Is there an illusion that’s your favourite?

I have three favorites at the moment! First, there’s Confetti Spheres 6, a Munker illusion that’s like my original confetti illusion but with spheres instead of dots. The spheres look like they are yellow, orange, green, and light violet but in fact are all the same color. Second, there’s Reversal 1, a dynamic Munker illusion: When zoomed out so that the image is small, the left interior rectangle appears yellow and the right interior rectangle appears orange. When the image is enlarged, the colors swap sides! And third, there’s MunkerTransparent Sphere Stereogram 1, a sort of “Magic Eye” image in which the Munker effect occurs even though it appears that translucent spheres are floating in front of the pattern that’s causing the color shifts! [Matt notes: you’ll find all these illusions in this interview.]

You mentioned that when you were in college you worked as a magician/mentalist. Does that experience impact your current work in engineering?

Amazingly enough, my work as a magician/mentalist does help my current work in engineering. In magic, the magician creates a context that shapes the viewer’s perceptions of reality and leads the viewer to respond in predictable ways. This can be in terms of, for example, directing attention or relying on people’s expectations of the properties of objects. In my research on dialog between humans and virtual agents, my students and I work hard to create conversation that shape the user’s understanding of the dialog’s context and lead the user to respond in predictable ways. This is important to us because the speech-recognition capacity of the virtual agents has significant limitations; knowing in advance what the user is likely to say helps us have the agent do better in recognizing what the user is saying. In effect, we are creating the illusion of a spontaneous conversation when, in fact, the user is unwittingly participating in a sort of play that we’ve already written—a kind of Hobson’s choice in conversation. I should add that I was lucky enough to meet the great magician Al Flosso, creator of “The Miser’s Dream.” [Matt notes: in a recent interview Shringi Kumari talks about creating the illusion of free choice in game design.]

The major goal of my research on virtual agents is to shift the burden of interaction from people to the agents. This means making the agents’ interaction more natural across multiple dimensions, especially with respect to gesture and proxemics (i.e., interpersonal distances). We’re particularly interested in how to build engagement, rapport, and trust between humans and agents. We’ve also looked at more subtle aspects of virtual humans, such as representing plausible breathing and the impact on rapport of introverted vs. extroverted speech. My team has produced a Unity asset called the Virtual Agent Interaction Framework (VAIF) that enables novices to create interactive applications with virtual agents in virtual worlds. VAIF is available for free on GitHub.

The biggest challenges my team faces right now involve mixed reality. For example, how could a human and a virtual agent take joint action in the world, such as lifting a table together? Current haptic interfaces don’t really go beyond finger motion. How can we scale this up to provide the feelings of volume, weight, texture, etc., of large objects? Could virtual agents work with real objects? [Matt notes: to read about a different side to haptic interfaces have a read of Dr Gavin Buckingham’s interview.]

How human can virtual agents be?

Virtual agents suffer from a long list of inherent limitations. Some of these are the same limitations faced by conversational agents generally; passing the Turing Test in any meaningful domain is a long way off. Other limitations relate to their physical representations, raising issues of falling into the uncanny valley. For me, then, the goal is not to create virtual agents who appear and act perfectly human. Rather, my goal is to help virtual agents be better partners for humans—interacting with humans in ways that make things as easy as possible for the humans. Much of this reflects basic principles and practices of human-computer interaction generally. But there’s so much that’s unique about virtual agents that they present hugely interesting opportunities for research.

Do you think a computer be programmed to be genuinely curious?

It would be easily possible to create a computer program that asks questions and then follows up with more questions in a logical way. And it would also be possible to direct these inquiries to serve some goal. But, as I see it, the goal would be given to the program, so the motivation for curiosity may play a role in how we see the curiosity as authentic or not. Of course children are constantly curious, learning about the vast number of things that they encounter; in a way, their “job” is to be curious. I suppose that a computer program could learn in this way, too, with relatively undirected curiosity about things in the world that it encounters. And even if the program didn’t store what it found out, it could continue to be curious, again and again, about the same aspects of its world.