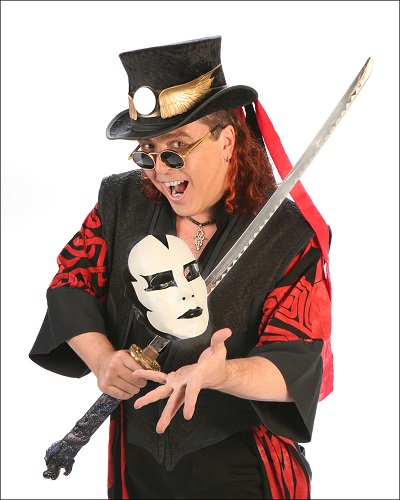 A foremost innovator and among magic’s most exciting performers, Jeff McBride combines mask, martial arts, kabuki theatre, world class sleight-of-hand, myths & stories from around the world, grand illusion – and more – to create electrifying performances that thrill a wide range of audiences. Founder of the McBride Magic & Mystery School, McBride is an accomplished creative consultant, teacher and lecturer, in addition to his amazing capabilities as a performer.

Recently, I was at David Copperfield’s museum and was helping him with the organization and archiving of some of his incredible collection. The things I think are wonderful are things somebody else might not think are so wonderful. Tiny little inventions or a special thimble holder, for me, are something wonderful that, to another person, would just look like so much office equipment; like a paper clip sitting there. Simple and elegant magic props which would just look like polished boxes to another person look beautiful to me. The way David has had the timeline of the history of magic laid out is absolute awe-inspiring.

I think these are three words that each have their own territory. When you use words like wonder, there is a whole category of words like wonder: amazing, awe inspiring, staggering. They’re all descriptive terms that can be used. The word “wonder” falls short of the aesthetically overpowering inspiring experience. There are little wonders and big wonders. I think what we’re looking for points beyond wonder to a much bigger experience.

Doug Henning used to use the word wonder a lot. “May your world be filled with wonder and the wonders of the universe.” Some people, like Max Maven, have taken the word ‘wonder’ to task and think it’s a wimpy word that’s been over used. When we’re older magicians, we become kind of jaded to wonder. Recapturing that sense of wonder is sometimes challenging and I think recently I have had some experiences that just filled me with wonder and they weren’t anything that I expected either.

Is there a better word for Wonder?

Mind blowing is a word that pops your paradigm. Everything that you’ve held true no longer exists in a moment. Paul Harris used the word astonishment; after going through a whole lot of words, he settled on that. Another person who’s done some work on this is Juan Tamariz. There are many different responses to magic and amazement. For mentalism [mind reading, choice predictions etc.], Tamariz says it’s “Hmm” With shock magic it’s “Oh!” There is “Haha” for comedy magic, and with my illusion The Rainmaker, people go “Whoa!”

When you’re a young kid, when you first see a horse, that’s something wonderful. When you’re a little bit older and you get used to horses and other animals, then many things become commonplace but magic continually pushes our imagination into the realms of the extraordinary.

Learning about magic becomes wonderful at a later age when you start collecting secrets, methods, and performance techniques. Going to your first live magic convention or opening up an amazing magic book; like the Tarbell course or some of the amazing Eugene Burger books can open your awareness to a whole different side of the philosophy of magic.

Does magic point to something bigger?

Magic is often performed on a trivial level… which is fine, we need trivia, we need relief from the terrors and the mysteries of the universe. Seeing a good card trick or seeing some other good trick is a nice way of reducing stress and maybe just having a good time. Magic, when it’s well done, is profound. It is a profound art form. Magic, at its best, is immersive; it’s a live experience.

When you first got into magic, was it the philosophical side of magic that appealed to you or was it more the technical side?

What drew me to magic, what kept me in magic was different over the years. I think that when you’re young, learning to discern what is real and what is illusion happens for young kids at around age seven, not really much earlier. You have a grasp on the nature of reality and that’s why most boys and girls get into magic around six or seven, you don’t hear about people being really cool magicians unless they have magic dads and moms at four years old that are making them do the cups and balls or the ball in vase trick.

It’s not normally good to have secrets but magic secrets are okay secrets to keep from your parents and your family. You have a little bit more status if you can do magic and have secrets that other people don’t have. All of a sudden, you’re smarter than adults because you know how these things happen and they don’t, and I think that’s part of the allure. “Wow, that is wonderful. How can I learn how to do that? And when I do then it becomes my secret.”

But now with the advent of YouTube, there are many, many resources that are available to people who want to learn how tricks are done and collect secrets. You could sit on YouTube endlessly and collect secrets but it’s not going to make you a good magician; it’s going to make you a secret collector, like a stamp collector. There’s difference between collecting magic and performing magic.

Do you think with the younger generation learning online they miss out on the foundations and basic building blocks?

What’s going to be the dividing line is the person’s understanding of magic history, theory and philosophy. If a person just knows how a lot of tricks are done, that’s not being well rounded in magic. The people that will be the real magicians will really know the history and where this stuff evolved from and how to create it. Not just how it’s done but who did it, where it was done and why it was done.

Knowing how something is done and being a magical performer are two very different things. Just like when you go to the opera, most people sitting in the opera are not singers, but they might be able to tell you about every costume onstage, every set on stage, every version of that opera ever done, the complete biography of every character on that stage, but they don’t perform opera. I think, these days, people that wonder about magic can be fed secrets, but they can’t learn the art of magic.

Can you talk about your views on the exposure of magic secrets?

Magic now is smaller than ever, short and flat into these tiny screens and devices we carry. One of the sad things about magic these days is you can show a clip of a masterful stage performance and then you get these imbeciles on YouTube going “Oh look at four minutes and twenty-three seconds, I see a string. What crap magic!”

Well I think today all the exposure is not dissimilar from the 1940s and 50s Camel cigarette ad exposures. There were cigarette companies exposing magic tricks on the back of cigarette packs and people thought that was the end of magic too.

It’s not like learning how a trick is done is the end of the world. I mean my biggest fans know exactly where the cards are hidden on my hands, and they have my videos. Isn’t that strange? That the people who are the hardest core fans of magic, know most of the methods but it still fuels their passion. That’s something to wonder about.

With your Mystery School, what do you think are the biggest challenges that your students face when they come to see you? Are there core challenges or things that you keep going over with each student?

What one of the challenges that is common for many, is the lack of effective scripting to move the action along that sounds natural. Many young performers these days resist scripting because they don’t want to sound scripted. They want to be organic and natural. To that I say, “go watch a movie.” The actors sound totally natural, but they’re scripted, they’re not making it up on the spot. It is important to have an outside eye, to have a director, because I think most magicians work as lone wolves and it’s impossible to get your material to the next level without a coach, or a director. I think all successful magicians have worked with coaches and directors. Very few have made it on their own.