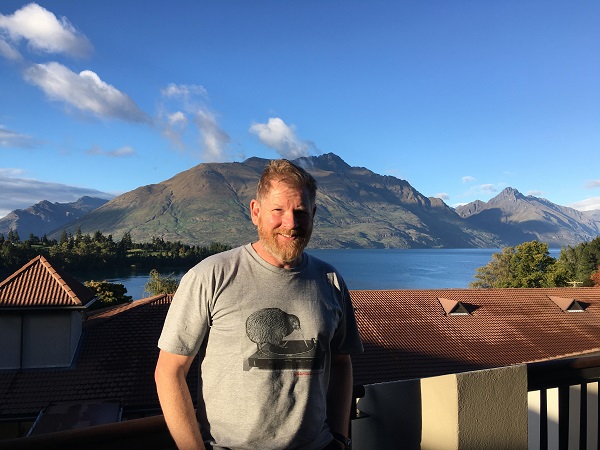 A filmmaker for over 20 years, Pip loves to find and tell stories that matter to audiences that care. He works collaboratively with others who share that passion.

Find out more about some of the film’s Pip has worked on here: The Insatiable Moon, Last Shop Standing, and Bicycle the film

Many years ago I was filming on the foothills above Lima in Peru in a make shift town. All of a sudden a small group of kids with an older woman gathered around and it became apparent they wanted me and the film crew to go with them to see where the old woman lived. We dutifully followed, twisting and turning through small dirt roads until we came to her house. They wanted us to film her kitchen with all its huge pots and pans, a place where 2 times a day she gathered whatever provisions she had and fed over 50 local kids as best she could. She was very proud of the cooker and pots and pans a French NGO had supplied to her.

I personally think they are all interlinked, intertwined in some mysterious way. I believe we are created to be capable of wonder, awe and curiosity. On a whole they are deep emotional and sometimes a physical response to something “other” ….something or indeed someone we have encountered that is outside ourselves yet connects to the inner part of our lives in a moving and dynamic way. So in many ways they are connected and perhaps designed to make us realise we too are connected.

I like the phrase “thin place” a sense of where the divine meets the earth. I love the sense of mystery. For people of faith, faith offers definition to that belief BUT there is also mystery. I cannot fully fathom God BUT I can and do experience that “thin place” and relish that.

Nature, people and stories in various guises and ways inform and inspire me. I do find seeking quiet, space and often movement important. There is no fixed ritual but a fusion of those things always helps. Movement will be cycling or walking. I am very visual in my creative inspirations and out-workings. I usually need some sort of emotional response. I personally think we connect much more deeply as people when things touch us emotionally. For me the draw to tell a story or connect with a person for a film may well be because I have had an emotional connection. Equally all my films have to have a an emotional heart, a truth to them. Maybe not overwhelming but definitely something that touches and connects.

As stated before I do believe it is in our human DNA. Set there by the creator who too is prone to wonder. I do not think wonder is always connected to things you don’t know. Indeed, if I take the wonder I feel when I am in nature it isn’t that I am seeing it for the first time or do not know what a mountain or seascape is. It is that it fills me with wonder. Time and again. I do believe God encounters that too. But hey I am no theologian!

To cultivate it we must actively seek people and places that help us connect to the “other”. That means pursuing lives that are not safe and fenced off but open and prone to meandering and journeys that take us out of the normal and comfortable.

You mentioned you’re visual in your creativity. Did that draw you to film or did film craft how you view the world? The stereotype of a photographer or a filmmaker is when they hold their hands up to their eyes a frame a shot. How true is that? Does life often get viewed through a lens?

That’s interesting and to be honest I am not really sure. I would like to think I choose film to give meaning to my desire to be creative and that of course is visual. It’s about communicating something.

How does a youthworker transition into filmmaker?

Slowly and by accident, then with determination and perseverance! Life is always full of surprises and landscapes around corners we do not yet see. If we live life where the journey is more important than the ease of the path then who knows where it may take us.

I really enjoy helping young people discover creativity and skills and passion. I think there is a lot of informal mentoring that takes place in our society but I do think much more is needed especially in school and local communities.

What would be a dream film project for you to work on?

Working with a great story that needs to be told. Working alongside creative and resourceful and committed people that I like working with. Having the resources from day one to make it happen as I have vision for.

Reading your answers, a word that struck me was ‘vulnerability‘. It’s something most of us aren’t good at. We like safe. We like certainty. Could you tell me a little more about being open to possibilities? And maybe an example story of where that has taken you?

Vulnerability for me has always been very helpful when attempting to be creative or indeed just be the best version of myself. I think it has often been mistaken for being weak. It may manifest itself in an awareness of how difficult the task ahead may well be and how I need to be dependent upon the team around me and my family and others for support as I move the project forward. I guess there is a sort of humility in vulnerability as it doesn’t place oneself at the centre but as part off something wider.

I have lived most of my adult life and certainly all of my 28 years of marriage and raising 3 boys into adulthood with a great sense of vulnerability often due to very limited or no actual resources in the wider world’s eyes , e.g. salary etc. This has been tough but has also brought really deep foundations of trust, resilience, creativity, and thankfulness.

“The Insatiable Moon” in many ways is still the film I am most proud of. We went from a $7m budget to just $350k and the film was made with love and sacrifice. It was completed on schedule and on budget after 7 weeks. It went on to win awards and accolades around the world. I made no money but it brought me riches far beyond any bank balance. I often start making films with no money and see where the journey unfolds. That is very different from conventional methods. I doubt I will ever be wealthy in financial terms (not an actual goal) but I certainly am wealthy in other ones.