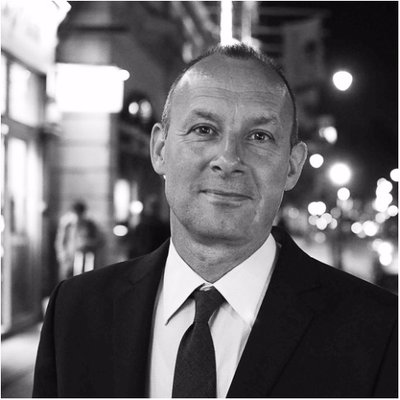 One of the founding magicians of Breathe Magic, Richard is a Member of The Inner Magic Circle with Gold Star and a former World Open Champion for Close-Up Magic. He performs for private and corporate clients worldwide and feels fortunate to have appeared at several events hosted by HM The Queen, including a private party to celebrate her Diamond Jubilee, which was attended by forty Kings and Queens. He has also created magic for other performers, most notably a Derren Brown TV show which won the Silver Rose of Montreux.

I was recently in Germany, and went for a beautiful walk at the top of a hill. It is Autumn now, and the line of trees that followed the crest of the hill was extraordinary, with each just a slightly different colour, from dark green to deepest red. With nothing beyond but a very blue sky and sunlight illuminating it, it was amazing and joyful; uncontaminated and surprising in equal measure.

How would you personally define wonder, awe and curiosity, and how do they relate to each other.

Wonder:  Feeling present to the extraordinary

Curiosity:  A desire to experience, understand and/or learn.

I am always curious to experience both wonder and awe, but while ‘magic’ is capable of inciting wonder, I am not so sure I have experienced awe.

In Geography ‘O’ level (GCSE to the younger ones), I remember the factors affecting migration of people described as ‘ push – pull’. I think an element of that is present in my magic: fear of mediocrity, boredom and inner pride are certainly some of the push factors. Others include a love of playing, my very eclectic tastes in all art forms over the years which have mixed and brewed inside me, and the problem solving that is required to keep the gap between the visualisation and the actuality as small as possible..

As to an environment that might aid my creativity, it depends if I am working on performance, writing or speaking. Walking is certainly important for all three.

Internally, the labyrinth nature of it; you can never get quite to the heart of it. You can certainly never get it absolutely right, and that appeals to me. The sheer number of layers that can make up any one moment within one routine needs constant attention and yet relaxation.

I enjoy the challenge of producing it when you need to, without detection. I love trying to make the structure, misdirection, or words mathematically correct. When you do, it feels like the last click of a dial on a safe falling into the right place.

Externally. While magic is supposedly about secrets, it is perhaps one of the most revealing of the performance crafts. It reveals which part of you as a performer you are happy to share, and which part of the audience they are forced to yield, each connected by a gossamer thread of whimsy.

What hinders an audience from experiencing wonder when watching a magician?

Ego. The intent of the magician is 180 degrees in the wrong direction.

Sense of wonder; where does it come from and what can we do to cultivate it?

A sense of wonder is a sense of humility; of knowing we don’t know, and embracing that. In an increasingly tech world, magic is increasingly important…if we can keep it relevant.

Where do we lose the magic in every day life?

Looking down (at screens), rather than look up and around.

Your website has the strap line “magic for life”. Can you expand on what you mean by that?

I have been closely connected to magic since I was very young, and, while there are waves of intensity( and sometimes those waves have been a long way out at sea), I cannot imagine not being connected to it.

In recent years I have understood the potential of magic being used in life, and not just as entertainment. I work a lot in healthcare and in business, both very different worlds from each other, and , ostensibly, from magic, but magic can have tremendous benefits in both these areas, and I find that immensely stimulating and rewarding.

Tell me about the Breathe Magic camps. What’s the project about and what effects has it had?

The initial spark was generated by David Owen MIMC. He has continued to be one of the central figures as Breathe Magic has grown year on year, in ways which probably even he could scarcely have envisaged. I have been very fortunate to have been part of Breathe Arts Health Research for ten years now. It is a not for profit social enterprise, which uses magic to help people with physical and mental health issues. The main patient group is for young people with hemiplegia, caused by an injury to the brain. The result of that is that the one side of the body, usually a hand or arm , is either paralysed or severely weakened. Normal occupational therapy is repetitive and sporadic. Breathe’s initiative is to bring the Occupational Therapists together with the magicians, explain what movements need to be practised, and then we design or adapt magic routines that have those movements embedded within the routine. The children come to a camp for ten days, for 6 hours a day. Everything is underpinned by science, and it is now recognised by the NHS as a clinical service because it is so effective.

The programme works because of the high standards across the board, and the close and open collaboration we all share. There are 7 magicians who work for Breathe, and five of them are Members of the Inner Magic Circle, so we try to keep it high so the young people are inspired to practice.

The results are truly astonishing, both physically and psycho-socially. In ten days, a 19 year old woman who has never held a knife and fork is cutting her own food; a boy of 8 whose hand has been tightly closed since birth, opens it. It is remarkable to see some of the results, and because we put a lot of emphasis on communication, their whole behaviour can become much more confident. We have also delivered programmes to adult stroke survivors and young people with severe mental health issues. Each has produced very positive outcomes.

You have an impressive client list from the late Prof Stephen Hawking to HM The Queen. What’s it like performing to some of the most influential people in the world?

At the time, I am observing them exactly the same way I observe every audience, making a mental note of beats and nudges to assess their response time. Afterwards I can sit and think about who it was. I tend to find that celebrities are the hardest to entertain, but really famous people are actually quite straightforward.

I aim to be very polite with my magic, and try and let that be present even in  the smallest details.

Magic is an act. It should be an act of generosity, and it would be lovely to see more kindness in magic; certainly when magicians congregate, and definitely when we perform.

One thought on “Interview 40. – Richard McDougall”