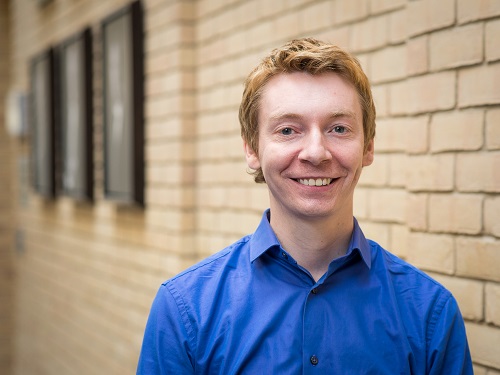 James Grime is a mathematician, presenter and public speaker. James has a PhD in mathematics but now spends most of his time travelling the UK and the world giving talks about mathematics. In particular James is known for his talks about the mathematics of codes and code breaking. James is also a presenter on the popular YouTube channel numberphile, which started in 2011 and now has over 2.5 million subscribers – with viewers around the world

If you have ever played with bubbles you may have seen that if a large bubble joins a small bubble it creates a wall between the two bubbles. That wall is curved as well, in fact you can also think of the wall as part of a larger sphere. The bubbles will want to minimise their surface area while containing the two volumes of air. So, if x, y, and z are the radii of the large bubble, the small bubble and the wall between them then, to minimise surface area, they are related with a reciprocal law: 1/x = 1/y + 1/z This is the same as laws that govern resistance in electrical circuits – yet a bubble will solve this automatically. Here we have two unrelated things that have the same maths underneath, and it is maths we can solve simply enough with pen and paper, but nature will do that automatically. There is beauty in that maths, is very neat even though initially the problem of minimising the total surface area looks like something that might be hard to solve.

A nice piece of maths that provokes awe and wonder should be a little bit like a magic trick. It should be something that surprises you, it should make you think “how did that work” or “how on Earth will you prove that”. The curiosity is questioning why something works. Which can be doubly impressive when the explanation is satisfying.

What inspires you to be creative? What environment aids your creativity?

I guess I am someone who craves novelty. I want to see and try new things. I want to be amused. So when I see an amusing piece of maths I want to share it. When I see a clever piece of maths, that was presented in a bit of a boring way then I will be bored too, but I might try and find a way to present it that I would like. Outside of work I just try to fill my brain with interesting experiences that can all go into a melting pot. My actual work environment is a very quiet office, but that’s because for my work I am going to an internal world. When solving maths problems, or even writing talks I go to an internal world. There I have all the parts I need, but those parts need to be arranged and put together like a jigsaw puzzle.

Are you happy with mystery or do you feel compelled to figure things out, solve puzzles, and find connections?

I think it depends on how motivated I am to find the answer. Has the problem sparked my curiosity enough that I need to find out how it’s done. Not all problems do that, but that’s ok, if we all liked the same things then we would all be solving the same sorts of problems and leaving others unsolved.

Ah-ha. I used magic as an analogy earlier without reading on. I do think there are two camps of people who enjoy magic – those who want to be impressed by the spectacle and can leave it at that, and those who get their enjoyment out of working it out. Both forms of watching magic is valid – although I know people who think analysing the trick is spoiling it. I try to enjoy a trick on both levels, but not be too annoying about my analysis. There are many styles of performance, I’m not too fond of the po-faced, pretentious type of performance, I’d must rather watch a street performer bantering with the audience, keeping the audience engaged who might otherwise walk away – I find that a fascinating skill.

Mathematics is often viewed as the least creative of school subjects. How would you counter that?

That was certainly true for a certain generation (or two), with maths simply presented as a set of algorithms. There would be a problem at the top of the page, you run through the steps and you get a number at the end. I think there has been a push against that for quite a long time now, with more emphasis on problem solving, so hopefully this is changing minds. There are a number of people doing fantastic work, approaching mathematics teaching as problem solving. My part is to show some curious nuggets and to show what you can do with maths after school, with the aim being to inspire and motivate.

For you personally, what’s the appeal of Group theory and combinatorics?

I think different kinds of maths attract different kinds of people. Some parts of maths is all about the details and looking for patterns and connections in those details. For me group theory and combinatorics was about taking a step back and seeing the object as a whole. This allows you to look at two things that might look completely different but when you take that step back you can see it’s really the same maths. For example, there are 24 ways to shuffle the numbers 1 to 4, and there are 24 ways to rotate a cube, and each rotation can be thought of as a shuffle of the four pairs of diagonal corners of the cube.

What’s your favourite code and why?

I’m going to say the One-Time Pad cipher – it is the most satisfying to me as a mathematician, because it is a 100% mathematically-proven unbreakable code. Imagine I send a code by shifting each letter of the message a different amount, from 0 to 25. If my friend knows that sequence of shifts they can just reverse what I did and get the original message back. But if a spy stole the code they would have to try every possible shift on every letter of the message. What they then get would be every possible message of that length, and there’s no way to tell which message is correct. The problem here is that the sequence of shifts have to be truly random, be different for each message, and need to be delivered to the other person without being stolen. So there are practical problems to this cipher, but the closer we can get to a One-Time Pad the closer we are to an unbreakable code.

One of the topics you speak on is the history of cryptography and particularly how the German Enigma code was cracked. It’s often portrayed as a triumph of British ingenuity. And I think in British culture we have this view that we’re most creative when under extreme pressure or massively under resourced. Do you think this is true? What conditions do you think innovation flourishes under?

I’m not sure how much the code breakers appreciated extreme pressure or lack of resources. I certainly wouldn’t have. What helped was that a lot of the code breakers were still very young, many in their twenties, which helps when dealing with that kind of situation. However Bletchley Park was a mix of young and old, and academics from all different backgrounds and subjects, this must have been fertile ground for collaboration and inventiveness. We should also mention that it was the Polish code breakers who broke Enigma first, and they did it by taking a different approach to code breaking than before, by hiring mathematicians rather than traditional code breakers like linguists.

Has GCHQ ever tapped you on the shoulder?

Maybe, but if I told you I’d have to kill you.