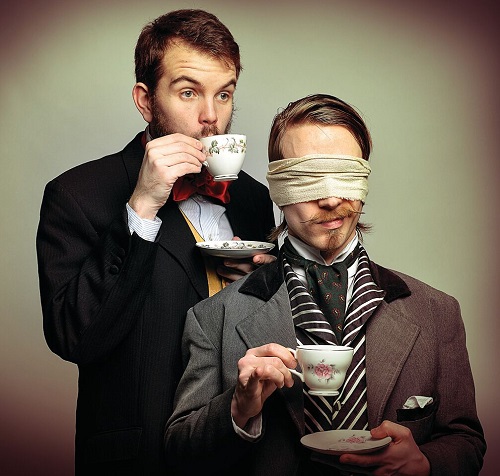 Morgan & West are a duo of magicians based in Oxford, who spend their time touring the country pretending to be time travellers and doing magic shows for adults and children alike. Before they were itinerant performers they were secondary school teachers, before they were teachers they did science degrees, and before they did science degrees they wanted to run off and join the circus, so all in all it worked out OK in the end.

It sounds stupid, but Rhys just got an amazon echo (other corporate controlled listening devices are available). Whilst it’s not the newest piece of kit in the world, as lifelong Sci fi fans who grew up in a world where mobile phones were still a joke on Only Fools and Horses, there’s something really amazing about turning on the lights in a room by asking a computer to do it. It gives you a glimpse of the sheer rate of technological change, which is both magnificent and terrifying.

We think wonder is the halfway point between curiosity and awe. Curiosity is seeing something clever and thinking “how does that work?”. Awe is seeing a hundred billion hotdogs and being overcome with the sheer majesty of it. Wonder is somewhere between – when you see something that not only captivates you, but that opens your mind to a new set of ideas. Wonder is about changing your view of what is possible.

What inspires you to be creative? What environment aids your creativity?
The magician Teller once wrote that “hate is a better muse than love”, and we very much take that to heart. Almost everything we have done in our career is from watching other magicians and performers and thinking “this is rubbish, there is a better way of doing this” and setting out to prove it. We are constantly trying to do new things, both to challenge ourselves creatively and to challenge the idea of what a magic show is and can be.

We are creative for a living, so we have learned practical ways of creating things. Everything we make comes in three phases: discussions, almost entirely conducted in the van or backstage at gigs because we travel so much; writing, where we try and pin down an idea by writing a script and developing a functional method; then refinement, which always happens on stage, night after night in front of an audience. We are firmly of the belief that any great idea is actually just a reasonable idea plus a lot of effort.

Wonder is a survivalist feeling. If you see a plant grow from a seed and it scares you, or if you pay it no interest at all, you will never develop farming, have food for the winter and eventually form civilisation. Humans seeing things and going “wow, I wonder what that is?” is the basis of our development as a species.

We don’t need to fight to survive any more, but I think it is easier than ever to keep wonder alive, with travel, or reading, or playing video games or watching TV. Anything that expands your mind and makes you ask questions is wonderful in the truest sense of the word.

We love high quality performance, of any type, and we love the feeling of seeing something and having no idea how to explain it – something that leaves you hanging for a moment in mid air as you realise the world you are watching isn’t quite what you thought. It is also super fun to be the one that creates this feeling in an audience.

No not really, magic is literally cheating to achieve the result you want in a way that an onlooker cannot reproduce. Science, or at least good science, is the opposite.

We do believe being scientists made us better magicians though, because it taught us to be analytical. If we see something we like, be it a magic trick, a comedy sketch, a play, we don’t just think “that was good, I wish I could do something like that in our show”, we deconstruct it. What was good? What was bad? What made the good bit good? If we changed it, what could you change and not lose the thing that made it good? Science taught us to pull things apart and see what made them tick. That is an incredibly useful skill for a creative performer.

Where did the appeal of setting your shows in the past come from?

The show isn’t set in the past. We play time travellers from the past, who perform in the modern day.

We have always enjoyed theatre, so we wanted to do a theatrical act, not just two guys in suits.

Magic is fake, and at some point in the performance of a magic trick, you have to lie to the audience. If you present magic as real – that you are your real self, just a normal every day person doing normal things – when you get to the impossibility, people suddenly realise that you’ve been lying to them, and that can be quite an unpleasant feeling. Essentially, you build rapport with people only to betray them.

When we walk out on stage, amidst the full theatrical set we have built, in full costume, and claim to be time travellers, the audience knows that they are watching a show. No one turns to their friend and says “I don’t think they are really time travellers”, because they are in on it – complicit in the deception. This way, when we get to the impossible stuff happening people have a much easier time swallowing it, because they know it is all fake, even if it looks real.

What’s the realities (positive and negative) of being creative and performing as a double act? Is your act the intersection of a Venn diagram or do you think the sum is greater than the parts?

Creatively, it is invaluable to work with other people. Even your best ideas as an individual will be improved by bouncing them off of someone else, and all your worst ideas will be filtered out long before you would’ve realised they are terrible. The same is true of having another pair of eyes to watch you perform, who will see things you could never see.

Also, it is worth pointing out than touring would be a very lonely job on your own – every professional experience we’ve ever had we have shared, which is great. We can also share all the driving we have to do.

One of your shows is “for kids and childish grown ups”. For those of us who aren’t time travellers, what’s the secret to not growing up and staying childlike in our thinking?

Just refuse. Refuse to deny yourself things because you are too old. Refuse to conform the box that society puts you in, be it about age, or gender, or ability, or whatever.

Be open to trying new things. Try stuff before you judge it, and if you don’t like it, don’t judge people that do. Just have fun. Have fun and don’t hurt other people.