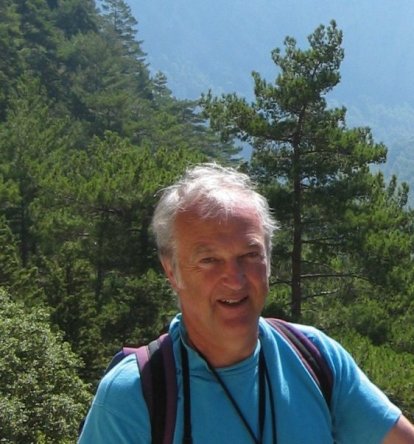 Biologist based at Exeter University with many years of experience in research on the biochemistry of genes. He introduced one of the first bioethics courses for biology students in a UK university and runs workshops for biologists on teaching ethics. John loves mountains, marshes and other wild places and enjoys bird-watching. He is a keen runner, a Bob Dylan fan and supports Crystal Palace football club.

Describe something that has recently amazed you and how it made you feel.
I want to mention two things if I may:
1) The Victoria Falls (visited in late August) – the height and width of the Falls, the power of falling water, the huge amounts of spray, the noise (no wonder that the local name is ‘The smoke that thunders’) – I think I felt that, although I was part of the scene, I was powerless in the face of such awesome power but was also able to aesthetically appreciate the beauty and majesty of the scene.
2) The sky at night. On a moonless but otherwise very clear night in North Yorkshire, the galaxy (Milky Way) was clearly visible; feelings again of smallness against the vast size and age of the universe – but again an appreciation of the beauty and gratitude that we could observe it.

How would you personally define wonder, awe and curiosity? And how do
they relate to each other?
In the two examples I mentioned, awe is a sense of being in the presence of something bigger than ourselves (but see my comments on DNA, below) but is combined with positive feelings about being there … it is that Wow feeling but extensively magnified. Wonder comes from a feeling of thankfulness and joy at being in an awesome place/seeing an awesome phenomenon but in the background there is a hint of questioning, and that questioning leads to curiosity – how does that happen? And I suppose that curiosity can also arise out of basic interest – a more intellectual approach without necessarily embodying the feelings inherent in awe and wonder.

What inspires you to be creative? Do you have any ‘rituals’ or an environment that aids your creativity?
Nature at all levels; other people’s creativity (in a number of areas); the wish to communicate clearly. Not really rituals – but if I’m stuck I may listen to some music or go for a walk, run, long cycle ride on my own – or go down to the local marshes with my binoculars for a spell of bird-watching. Being out in nature is very important to me.

Where do you think our sense of wonder comes from and what can we do
to cultivate it?
It is possible because of our human-ness – we are self-aware, spiritual beings with, for the most part at least, a sense of questioning. In order to cultivate it, I think that the more we know about how the world works and how unlikely it is, the more we are prone to wonder. Good TV programmes can help. This quote attributed to Einstein (but he almost certainly did not say it) gives a flavour of the difference between different types of people: “There are only two ways to live your life. One is as though nothing is a miracle. The other is as though everything is.” And maybe we should accept that – and I will add, if you struggling to makes ends meet, to provide for your family etc, you will probably have little time for wonder.

Your research on cells and DNA, studies objects too tiny for the human eye to
see, what do you think drives scientists to explore further and further?
In respect of my own work on DNA I am also in awe of the complexity and the beauty of the mechanisms by which a cell regulates DNA replication (awe can be induced by the small as well as the large). I was driven by curiosity about how a cell regulates this particular aspect of its life and as we found out more and more so it became apparent that we still had more to find out. If you are curious about something, then you want any answer, even if that answer is very incomplete. As the science philosopher Karl Popper said: “Knowledge is finite, ignorance is infinite.”

You also have research and teaching responsibilities in bioethics, should
there be limits to curiosity?
We cannot impose limits on human curiosity but we should (and do) impose limits on the methods used to follow that curiosity and on the uses to which our knowledge is put.

Do you see creativity in nature or is biology just the out workings of simple
rules and processes?
The way that the planet and life thereon have evolved, the way that everything interacts, the very clever mechanisms involved in maintaining life – all these look like creative processes – and that feeling of creativity is enhanced when we think that life with all its complexity exists in a world that is bound by the immensely strictly controlled physical ‘laws’ that govern the way that ‘stuff’ works. Amazing that very simple beginnings have given rise to the array of living things that have existed and/or now exist on planet Earth. Creative – yes.