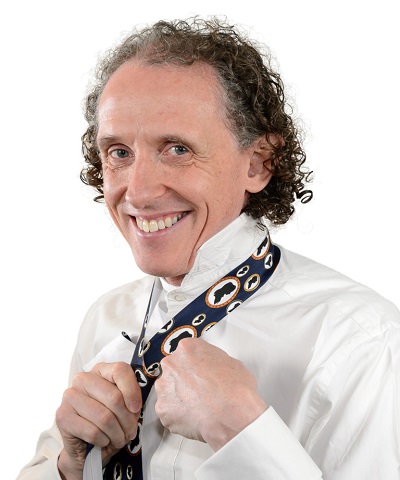 The two lessons Charles Burns learned at school were that he a gift for drawing, and that he had trouble making friends. After leaving art college he spent twelve years working as a street portrait artist in London’s Covent Garden. Whilst there, he discovered and mastered the lost art of the silhouetttist: cutting portraits from paper. Today, armed with just a pair of scissors and a pocketful of black paper, Charles has a busy schedule appearing at prestigious events all over the world.

A silhouette cut of a Great War German army officer by an unknown artist. The artist had cut every detail of the soldiers uniform. Looking at it I thought “I wish I’d done that”. However, I later realised I could never have done that because, after 25 years of cutting, I have no idea how it was made!  It fills me with a longing to at least know the artists name, even if we can never meet and watch each other cutting.

To me these are all part of the same process. In art college we used to talk a lot about “artistic research” – almost as if it were a kind of science. It basically means allowing oneself to be guided by a sense of curiosity and wonder, towards an ill-defined goal, with complete honesty. It means being prepared, like a scientist, not to “hold on” to research, because of one’s ego, if it becomes clear that it’s leading you down a blind alley.

Mostly other artists, which could be speakers, performers or painters. I know they’ve hit the creative nerve when I find myself thinking “I wish I’d done that”. This is soon followed by a fresh wave of ideas for my own work.

What environment aids your creativity?

A walk in the park. A long, hot bath. Also, deadlines are really important. Without a deadline I find it hard to make a good idea into anything other than that – an idea. Deadlines drive the creative process from initial idea to actual production.

The sense that something impossible has just happened, which causes me to be momentarily less sure of my assumptions about the world.

And what do you dislike about magic and/or the performance of it?

Lies, concealment and deliberate misdirection, especially when used for the personal aggrandisement of the magician.

I think wonder at the world around us is an innate human quality which stems directly from our own self-awareness, and the awareness of our own mortality. This awareness, which is related to our abilities with language, is the one thing which truly distinguishes us from other animals on the planet. Wonder at the world is the equal and opposite quality. It comes from our awareness of the world as being other than – and independent of – our own existence. This immediately causes us to ask questions about what is going on.

You’ve recently released a film exploring the art of silhouette cutting, can you tell me some more about the history of this art form?

In a nutshell, silhouettes became popular in the late eighteenth century, a period of artistic mannerism. Their popularity was partly driven by the availability of good-quality, cheap scissors (a product of industrial revolution) and partly by the pseudo-science of physiognomy (the study of human qualities in facial features). These two things led to a craze in silhouette cutting which lasted throughout the early nineteenth century.

Silhouettes were then sold as being the most scientific and modern form of portraiture. Since silhouettes were often traced by machines (such as the physiognotrace and pantograph) before being cut out, they could claim to be “a scientifically-accurate likeness, made without prejudice or the flattery of an artist”. This emphasis on machine-made likenesses proved the undoing of the silhouettists when the camera was invented in the late 1840s, a machine that could clearly do this job so much better.  Silhouettes quickly became obsolete and by 1860 there were no professional silhouettists left at all.

The 1900s saw the beginnings of a revival of the silhouette in city centres all over Europe. This revival really took off in the 1920s, after the Great War. A new breed of silhouettist did away with the old machinery and concentrated on freehand cutting. Without any trace of irony they aligned themselves with the arts and crafts movement, harking back with a sense of nostalgia for an older, pre-technological age when life was simpler and people didn’t get blown apart by machines.

In many respects this is still their appeal today. In today’s digital age poeple often comment how refreshing it is to see somebody earning a living with a pair of scissors.

How did you get into silhouette cutting?

I began cutting silhouettes whilst working as a street portrait artist in the early 1990s. I couldn’t find anybody to teach it to me, so ended up teaching myself by studying the work of Hibert Leslie. Leslie was a silhouettist who on Brighton Pier in the 1920s and 30s (one of the revivalist artists) and who left behind an archive of 20,000 duplicate silhouettes. These now reside in the National Portrait Gallery.

What’s the big appeal for you?

At first I simply wanted to expand my range as an artist. I was looking for another income stream! Later on, I found that the more I looked at this deceptively simple art, the more it had to show me. The more I learn about silhouettes, the more there is to learn. They seem to me like a kind of artistic Tardis. Somehow there is much more inside than out!

What are the challenges? Are there certain subjects you struggle with?

For me, the challenges are mostly personal. I’ve always been confident in my ability to draw (and later to cut) almost anything. I’m much less confident in my communication skills and my ability to interact with others. My work as a silhouettist forces me, again and again, to step outside my “comfort zone” and come face to face with the world around me. For me, this is a much healthier relationship with art than if I spent long hours painting alone in a studio.

You speak on creativity, what lessons do you draw from your silhouette cutting?

The greatest lesson is that of being true to oneself – of following the “creative path” even when there is no obvious reward in sight. This can (and often does) lead me to spend hours on seemingly pointless tasks – just because they interest me. Yet, all my skills as a silhouettist, and all my knowledge about them, has arisen from just this kind of apparently pointless activity.