This spring I really appreciated the colour of intense young leaf green on a new level. Something was triggered within me whenever I saw sunlight shining through new leaves. During the spring and summer this year on an almost daily basis I would stop and just stare at the vivid greens in trees and bushes. I felt some sort of natural high. I can’t explain it.

I think if someone’s experiencing wonder they’re still capable of moving and thinking, whereas true awe leaves a person incapacitated, frozen. Awe is a mystical experience. Curiosity and wonder are very related. They’re both innate but I think you can lose them as you grow older and jaded. If you have great teachers in your life they can awaken or reawaken curiosity and wonder. Now what differentiates these two? Curiosity can be purely cognitive and intellectual whereas wonder implies a level of spiritual and emotional openness to the unknown beyond curiosity. Perhaps in pursuing something you start off curious and once you discover more, that curiosity dissolves into wonder.

I’ll name a few things: heartache and tragedy, injustice, well-written and acted film dialogue, Aesop Rock’s ‘Impossible Kid’ album, friends riffing off each other in conversation, illustrations by Ross Spencer, mishearing words and phrases, Doseone’s rapping in the song ‘No Brakes’, strong conceptual art, Andy Goldsworthy, ‘The Mind of the Maker’ by Dorothy Sayers, listening to theologian friend Bill Gordon share his ideas, Reverend Billy and the Church of Stop Shopping, Katrice Horsley, Nabokov’s ‘Pale Fire’, Afrofuturists, the Ram-Ell-Zee, seeing poorly executed hip-hop theatre, detailed maps, Simon Ellis and other filmmakers who are excited about what they’ve made or what they’re making and inevitably when a hip-hop producer plays me a killer instrumental track. I want to grab a Bic pen and start writing a verse.

Being sociable; listening to and interacting with friends and strangers. And reading; the more I read, the greater my desire to make and write.

I love when I mentally guess the outcome of a trick and I’m wrong. The other thing I’m impressed by is when a magician is able to quickly woo an audience and in an unforced way makes you feel like we’re all experiencing something new together. When a magician expresses that genuine look of surprise at the outcome of their own trick, that’s priceless.

If the magician is too pushy, polished, smarmy or communicates unearned, unironic pomp it’s hard to experience wonder. If an audience member is merely looking for the mechanism of a trick perhaps they’ve lost the ability to just enjoy it.

Isn’t our sense of wonder innate? We ourselves are a wonder. Cultivating wonder to me is daily expressing gratitude to God for blessings in life (the ability to taste, walk, hear, sneeze, etc.), getting onto my 2-year-old daughter’s “wonder wavelength”, getting out into the wild, star-gazing, watching human-destroying-size waves crash onto rocks, witnessing performers especially dancers, singers and magicians live and up-close.

So who is Joel Wilson? And what on earth is ‘The Quickener’?

I grew up in Dublin, Ireland and small-town Germany. Life was skateboards, sci-fi novels, home-made board games, Arkanoid dreams, no-hands cycling, table tennis and my fair share of cultural misunderstandings. My parents encouraged my love for films and introduced me to the notion that art could be subversive, prophetic and could speak truth to power. I’ve written, directed and produced many short films, documentaries, ads and music videos and I’ve been writing rap songs since 1991, the year I moved to Birmingham, England.

My 30-minute medieval rap film ‘The Quickener’ combined my love for film and hip-hop culture. Essentially the film is a period drama told through the eyes and the ears of four hip-hop emcees, so there are noticeable references to rap music and culture throughout the film. I gave Juice Aleem, who plays a hermit-monk, the line: ‘Our corpses will be quickened – new spirit – new flesh’. Juice is part of a brilliant rap group called New Flesh. All the dialogue is spoken in the rhymes and rhythms of rap and performance poetry. The story plays with the biblical notion of God’s interaction with humans in times of deep crisis in the form of a reluctant prophet. On a simple level this film details the moment someone realizes that their ambitions and aspirations are meaningless compared with the potential of embracing a deeper calling. I got to work with some wonderfully talented cast and crew who graciously helped make my weird idea a reality. 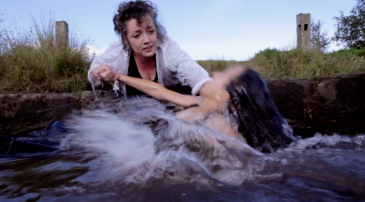 Nearly every conversation we have always turns to films. Why do you love film as a medium? What films have had the most influence on you as a person?

Film just has the infinite ability to woo, delight, surprise, unsettle and profoundly move. Hundreds of things can go wrong in the making of a feature film that it’s actually incredibly impressive when everything (onscreen and through the speakers at least) goes right. Every half-way decent film is a monumental feat worthy of respect.

I did a PechaKucha presentation on ‘Parenting and Cinema’ a few years ago, in which I consider the influential films in my life. Some of the main ones are ‘What’s Up Doc?’, ’12 Angry Men’, ‘Capricorn One’, ‘La Haine’, ‘Before Sunrise’, ‘Italian for Beginners’, ‘Embrace of the Serpent’, ‘A Walk Through H’, ‘Under the Skin’, ‘Krisha’, ‘Seven Samurai’, ‘The Limey’ and ‘The Tree of Life’. ‘Three Colours Blue’ as well as being perfectly shot and edited is melancholic yet also spiritually hopeful and left me feeling a way I’d never felt before. I love it when that happens.